Statistics have it that 1 in 4 British adults are obese. With this figure, the UK is considered to be the country in Western Europe with the highest prevalence of obesity. If this goes on, the UK is on its way of becoming the “fat man of Europe.” Published by Hypnosis in London on 11 April 2016, written by Malminder Gill.

Although there are several factors leading to obesity, most cases of it are the result of lifestyle choices specifically of a sedentary lifestyle and poor eating habits. In a study, it was found out that obese people tend to have more servings of high-calorie but low-nutrient food.[1] In another study, researchers have found out that obese individuals are also frequent snackers.[2]

In the previous years, health and nutrition experts have advised us to eat frequently in order to lose weight. So, in addition to the three meals we have each day, we have morning and afternoon snacks. And we think that it’s okay not until reports have revealed that frequent snacking can also be a culprit of the growing obesity problem. Americans, who also have a problem with obesity, have shown in a study to be eating more frequently than they did years ago.[3]

The Science Behind Frequent Snacking

Cravings have played a significant role in one’s tendency to snack frequently. Thanks to science, what used to be a confusing phenomenon has now an explanation.

Based on studies conducted, one’s cravings can be attributed to several factors including brain mechanism, stress, and emotions.

In a study done by researchers at Imperial College London, it was found out that a certain brain mechanism can be responsible for one’s cravings with sweet and starchy food. The team hypothesized that a particular enzyme called glucokinase may have a role to play in one’s desire for sweet food.[4] Since the level of this enzyme varies from person to person, one’s desire for sweet and starchy food also differs.

Stress also has a role to play in one’s cravings. Short-term stress may shut down one’s appetite but once it is prolonged, it can lead to overeating. Oftentimes, these stress-triggered cravings can result to overeating of food high in sugar and fat.

Contrary to what other people believed, cravings don’t occur as a result of dietary restraints. In one study, they found out that there is a weak correlation between dietary constraints and cravings. What the researchers observed among the subjects is that they were bored and anxious before the cravings start to hit them.[5] They theorized that certain moods can trigger overeating. 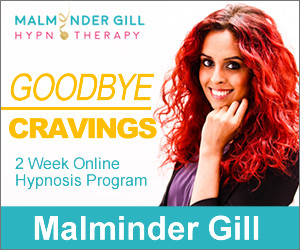 Cravings can contribute to obesity especially if one develops a special liking to foods high in sugar and salt. But just like addiction, you can put an end to your unhealthy food cravings. Here are some strategies you can try:

I’ve been using guided hypnosis to help clients deal with different issues in life including anxiety, weight problems, and addiction. I understand that not all clients can come to see me personally for one-on-one sessions. So, I created online hypnosis programs as a close alternative.

Since it’s an online program, you will automatically receive the live recorded hypnosis sessions together with a workbook upon purchase.

To know more about this online hypnosis program, you can check out this page.

Food cravings can be detrimental to your health. It may not look serious at the beginning but allowing it to control you definitely makes it a serious health threat. So, learn to manage it before it controls you.

Why Breaking Up With Sugar Is Hard!

Why Breaking Up With Sugar Is Hard! In last week's post, I covered the ten key signs of sugar addiction. In this week's post, I'll…

Are You In Love With Sugar?

Are You In Love With Sugar? According to research by Public Health England, the average person eats three times their recommended daily intake of sugar.…